The Evolution of Fire Safety in Supertall Buildings

Tall buildings have always relied on a combination of passive building elements and active fire detection, alarm/notification, and suppression systems to control fire and its effects. What has changed is how we use these passive and active elements and the intended results of these fire safety strategies. This evolution is the result of both advances in structural and fire safety technology, as well as new safety and security threats that make the integrity of the building structure and the ability to evacuate occupants in a timely manner of the utmost priority.

Fifty years ago, the technology available to us to create fire-safe tall buildings was quite basic. Passive protection of the steel structural elements was provided by sprayed-on cementitious or fiber fireproofing materials. These materials were designed to insulate the steel from the heat of a fire and keep the steel below critical temperatures for a prescribed period (usually 3 hours for the structural frame and 2 hours for floors when tested to a standardized fire exposure test). Exit stairs to evacuate occupants from the fire area to areas of relative safety within the building were provided. Firefighting features such as elevators and firefighting water supplies to facilitate fire department response and manual suppression of fires at altitude were developed. Still missing from fire protection strategies were reliable fire detection, alarm and voice communications, and automatic suppression by sprinklers.

The idea that tall buildings would someday be targets for a broad range of malicious attacks was not a consideration for the first wave of tall buildings constructed in the 1960s and 70s in the U.S.

The 1970s witnessed the first, sustained tall building boom in the United States with iconic, tall buildings constructed in Chicago, New York, and other major cities around the country. Most building codes did not include provisions specifically for high-rise buildings. During this time, design practices advanced ahead of codes and standards. Only after significant experience with high rise design and high-rise fires did codes and standards adopt specific high-rise provisions. In those early days, passive elements were more prevalent than active elements. Fire alarm systems were not considered reliable in fire safety design. And, automatic sprinkler systems that, at the time, used thick-walled schedule 40 pipes with screwed fittings that were cut and threaded on-site, were considered too expensive.

The goal of passive elements was to control the spread of fire and to maintain the buildings’ structural integrity during occupant evacuation and manual firefighting operations. Structural systems were primarily structural steel frames with steel deck and concrete floor slabs. 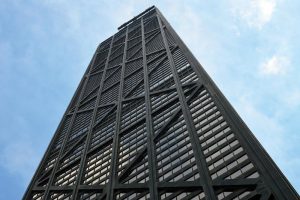 The 875 N. Michigan Avenue Building in Chicago, formerly the John Hancock Center, is a typical example of high-rise construction during this period. The building structure consists of a robust structural steel frame where the perimeter structural system carries significant structural load with perimeter diagonal bracing for lateral loads. Although the robust steel structure itself has significant resistance to heat from a fire by virtue of its high thermal mass, spray-applied cementitious fireproofing was also applied to the structure to provide the required fire resistance of 3 hours to the structural frame and 2 hours to the floors.

Exit stairs, elevator shafts, and mechanical shafts were enclosed with fire-rated non-structural drywall or concrete block construction. In those early designs, the building core was typically not a structural element and did not generally contribute to the structural strength or fire resistance of the structure itself. Active firefighting systems were limited to a water supply. In most cases, this included relatively small on-site tanks and heavily relied upon municipal water supplies pumped to upper levels of the building to serve wet standpipe outlets located in each stair for use by fire department personnel. Those services were considered highly reliable, and the need for the building to operate “off the grid” was not a high priority.

During the mid-1970s, building regulations in Chicago, New York, and throughout the U.S. “caught up” with the design practices of early tall buildings and mandated specific requirements for tall buildings. The requirements included most of the passive features incorporated into the earlier designs, including structural fire resistance and enclosed egress stairs. At the time, automatic sprinklers, active smoke control systems, and emergency voice communication systems were not required by these codes.

During the 1980s, the U.S. experienced many significant fires in high-rise buildings, including hotels and office buildings. However, none of those high-rise fires resulted in the overall failure of the buildings’ structure. In several cases, there was significant localized structural failure where the localized heat of the fire had compromised the steel structural frame with spray-on fireproofing. As a result of those fires, many of the U.S. codes mandated automatic sprinkler protection for all new high-rises and eventually for most existing high-rise buildings. It is widely held that automatic sprinklers are the most effective way of controlling fire size and therefore controlling heat and smoke from a fire. Sprinkler system technology had also advanced considerably at this time, reducing costs and improving constructability.

The next tall building boom occurred in Asia during the 1990s. Two iconic projects during this timeframe were the Jin Mao Tower in Shanghai and the Petronas Twin Towers in Kuala Lumpur, Malaysia. Built contemporaneously, these two projects represent an evolution in the structural design of tall buildings and the associated fire safety strategies of these buildings. In both cases, the buildings were designed by U.S. based design and construction teams, using a combination of local building regulations and international design standards and practices. In terms of both structural systems and fire safety, both projects were quite advanced for their time. 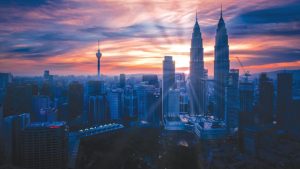 Both designs incorporated poured concrete structural cores with composite perimeter super columns and steel and concrete floor assemblies. The early use of high strength concrete enhanced the design efficiency of the core and perimeter columns. This structural system was found to have the advantages of both improved structural efficiency and improved ease of constructability. With the concrete core carrying a significant portion of the lateral loads on the building, the structural system had the advantage of allowing the perimeter to be more open to more glass curtain walls and better views for building occupants.

The concrete cores provide a highly fire-resistant enclosure in the center of the towers, separated from the occupied areas of the buildings where fire is likely to occur. All critical life safety egress stairs, firefighting elevators, and critical risers’ power, fire alarm, fire sprinkler, and smoke exhaust are located within the fire-resistant core, protecting them from fire occurring in the perimeter occupied portion of each floor. The concrete core wall also forms a portion of a fire-rated public corridor system surrounding the core and separates occupied office spaces from the common public exits and core elements.

In the Petronas Towers, in addition to the emergency evacuation stairs, firefighting elevator vestibules, and critical life safety risers, the concrete cores also contain passenger elevators that can be used in some emergency scenarios to evacuate building occupants from the sky lobby levels. The sky lobbies are designed with limited combustible contents so they can act as safe areas for staged building evacuation during emergencies. The sky bridge has the additional benefit of providing an emergency evacuation route between the towers in case of an emergency affecting the lower portion of one tower.

As a result of the events of September 11, 2001, the U.S. National Institutes of Science & Technology (NIST) undertook a series of investigations into all aspects of the design and construction of the World Trade Center towers. The results of these investigations, published in the document “NIST NCSTAR 1 Final Report on the Collapse of the World Trade Center Towers,” includes “areas in current building and fire codes, standards, and practices that warrant revision” including “a list of 30 recommendations for action in the areas of increased structural integrity, enhanced fire endurance of structures, new methods of fire-resistant design of structures, enhanced active fire protection, improved building evacuation, improved emergency response, improved procedures and practices, and education and training.”

The NIST recommendations included changes to structural design standards to prevent progressive collapse, as well as changes to fire endurance of structures, in-service performance of fireproofing materials, redundancy of active fire protection systems, and provision for full building evacuation in response to a wide range of emergency scenarios other than fire.

Many of these recommendations were adopted by model code groups and were incorporated into their building and fire codes. The 2009 International Building Code (IBC) adopted a series of new requirements specific to buildings more than 420 feet (128 meters) in height. These requirements include:

Many of these enhanced features that were incorporated into high-rise buildings on a project-by-project basis were now mandated for all buildings over 420 feet.

The design of Burj Khalifa, currently the world’s tallest building, began in 2003 after the events of 9/11, but before the release of the NIST report and the incorporation of the report’s findings into the 2009 IBC. The design does incorporate several features that eventually became part of the 2009 IBC requirements. The design also incorporated some relevant aspects of the local code in conjunction with international codes (IBC) and fire safety enhancements. 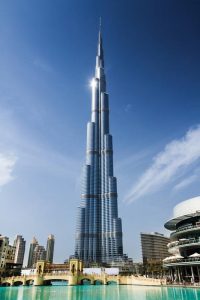 Because of the extensive pace of development in Dubai at the time of construction, the building was designed so that it does not rely on municipal water or electric service during emergency operations. The fire protection water supply is provided from water tanks of 1- or 2-hour capacity located on all mechanical floors. Water supplying automatic sprinklers is fed by gravity to zones below the tanks, so there is no reliance on fire pumps to supply necessary water in an emergency.

Finally, evacuation elevators are incorporated into the design to enable full building evacuation, if needed, based on a broad range of emergency scenarios. Shuttle elevators are operated in “lifeboat” mode to shuttle occupants from sky lobbies to grade.

Currently under construction in western Saudi Arabia, Jeddah Tower, when complete, will be the world’s tallest building at over 1,000 meters. Structurally, the building is quite similar to the Burj Khalifa, using a fully reinforced concrete structure for most of the building, incorporating concrete core, shear walls in each wing, columns, and concrete floor slabs. Because the building is residential, it is also highly compartmented by concrete corridor walls and demising walls. Passive fire protection is achieved primarily by the building’s concrete structure, which acts as a fire-rated enclosure for all exit stairs, firefighting elevators, and evacuation elevators. Critical fire safety system risers are incorporated into the building’s core.

Over the past 50 years, our approach to fire safety in tall buildings has evolved considerably, incorporating new technologies to provide buildings that are protected from a broad range of threats from fire, natural disasters, and malicious acts. As we keep building taller, our strategies and technologies will continue to evolve.■

The Evolution of Fire Safety in Supertall Buildings