The art of bridge design is a time-honored pursuit that, throughout the centuries, has undergone significant advances in engineering and technology as a result of mankind’s passion to conquer the challenges of any given crossing. It has evolved through the acceptance of well-established practices, codes and construction techniques. In fact, when new materials or methodologies are brought to the market, it often takes many years for the techniques to gain inclusion in the modern practice of bridge design. 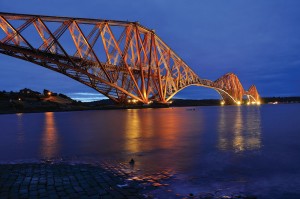 Iconic Firth of Forth Bridge, Scotland. Courtesy of Jim Wilson.

For example, even after the high-strength characteristics of iron were recognized, as compared with timber, iron was still used as a lighter-weight substitute. It was years before it came to be a stand-alone structural material for bridge design. Steel also went through a similar transformation before it was used as a replacement for iron; welding and bolts replaced rivets; and in today’s modern age, computer analysis and CAD (from matrix methods though FEMs) have replaced hand calculations and hand drafting.

Where are we now in this continuum? Advanced modeling techniques, material choices and analysis methodologies adopted for building practices are not yet fully embraced within the bridge industry. This paradigm will soon shift, and we anticipate that advanced computational modeling will be one of the next big advances in bridge design.

The need to create crossings has always been one of mankind’s biggest challenges, and often leads to an increase in man’s ambition to have a more enhanced understanding of mechanics and advances in technology and materials. These challenges create opportunities, and some of the greatest leaps in engineering design and construction have occurred from the need to push boundaries. Examples of this are evident from the earliest recordings of Roman cofferdams, to the Great Stone Bridge of the Sui Dynasty (581-618), through to the Industrial Revolution (1760-1840). The Industrial Revolution in particular was a watershed for advances in materials and design, and coincided with the need to facilitate an ever-expanding infrastructure network.

While Pre-Industrial Revolution bridges were predominantly wood or stone, during the Industrial Revolution, iron became a viable option following the construction of the Iron Bridge that stretched across the River Severn in Coalbrookdale, UK. This can be seen as the beginning of modern bridges produced with a new material palette of industrially produced iron, which gave way to cast iron, wrought iron, steel, and reinforced and prestressed concrete. This period also saw the development of the Americas, which presented a growing need for extended infrastructure. 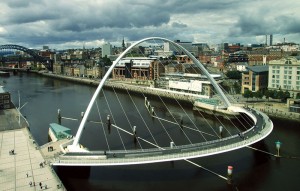 In particular, the development of the railway network was instrumental in pioneering works such as the first major crossing across the Mississippi via the Eads Bridge in 1874, directed by Andrew Carnegie through the Keystone Bridge Company; the iconic Firth of Forth Crossing in 1890 near Edinburgh; and the world-famous Brooklyn Bridge in 1883. This era is often heralded as one of great civic works that captured the imagination of the public and expressed the rapidly expanding vision of engineers, architects, entrepreneurs and empire-builders. Engineers played a prominent role during the Industrial Revolution and Victorian era, introducing to society names such as Telford, Brunel, Roebling and Eiffel, and later, Freyssinet & Amman. As architects took a lead role in the design of buildings, the design and construction of bridges remained very much the domain of the engineer. Major civil works, including those of Amman, continued to push materials and analysis to new boundaries and spans – notably with the use of cables in suspension and cable-stay bridges. With increased spans came heightened awareness and consideration of wind forces and aerodynamics that led to slender bridges. Following this path, we can see the raw beauty of stressed ribbon bridges, such as ones designed by notable engineer Jiri Strasky, which epitomize both a structural and aesthetic purity that has become the hallmark of signature bridge design. Bridge design continued to be dominated by engineers; however, appreciation of the aesthetic impact was on the rise.

In recent times, we have seen architects play a larger role in bridge design, creating signature bridges that become important objects in the public realm. Many have become landmarks that raise the profile of the bridge design industry, and highlight the importance of an integrated design approach. Bridges by nature are pure, almost raw objects, and as such possess a sculptural quality that is embraced by the public. Through careful design, considering the form, function, detail and potential to create more than just a link, bridges and bridge designers have become more high-profile than ever. Celebrated engineer and architect Santiago Calatrava is well-known for his esoteric bridge designs, and involvement of well-known designers such as Sir Norman Foster, Zaha Hadid, Wilkinson Eyre and Thomas Heatherwick, amongst others, on some truly innovative bridge projects, has helped raise awareness of the importance of an integrated approach to bridge design. 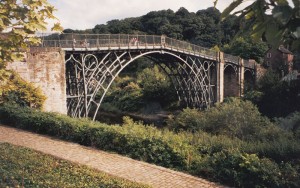 The domain of architects was more traditionally associated with building design, and in keeping with this trend of architects’ increased involvement in bridge design, it is only natural that some of the recent innovations adopted in building design will be implemented in bridge design. It is clear that there will continue to be advances in material science that push the boundaries of the current palette of materials (steel, cables, wood, glass and concrete) and an expanding role of newer materials such as plastics and composites, like the Sandwich Plate System (SPS). Similarly, continued development of analysis software and understanding of geometric and material nonlinearities will also lend itself to push these materials to new bounds. However, two areas in which we see great growth and opportunity for the future of bridge design are the application of advanced geometric modeling and the delivery of the design in a form that can be directly implemented into the fabrication process. 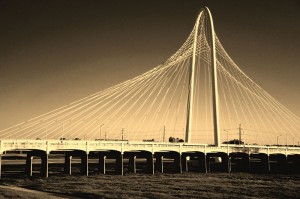 Advanced Computational Modeling (ACM) is a powerful tool for both the conceptual and design development phases. As bridge forms, particularly for footbridges, become more complex, ACM can be used to quickly investigate form-finding and generate various geometrical options. As part of this process, the ACM platform can be used to refine and economize the design and promote early understanding of the structural behavior, visual appearance, fabrication complexities and sustainability issues. ACM can work within many platforms, including Rhino, Grasshopper and Digital Project. These software packages, ubiquitous within the design community, facilitate development of forms that can be quickly exported into a structural analysis package and assessed for preliminary sizing and behavior. The ability to produce early 3D images and renderings is also important, not only for consolidating the design with the team but also for producing visual graphics for clients, competitions and media. By controlling parametric boundaries, it is possible to quickly optimize the design for a number of parameters ranging from weight to solar heat gain, offering early evaluations of issues such as constructability or energy modeling. 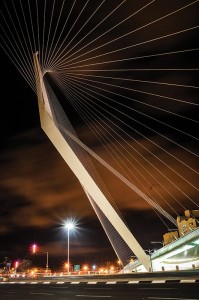 An example of this could be a covered pedestrian bridge between two buildings in a hot climate, whereby the project demands a high-profile response. Early ACM work can be used to generate organic structural forms, simulate various coverings from tension fabric to glazing to Ethylene TetraFluoroEthylene, orientate the structure to both an optimized form while providing maximum shading in the areas required, while passing as much natural light as possible. The bridge structure can also quickly be decomposed to show transportable and erectable sections, thereby directing the constructability and early cost evaluation.

The ability to fluidly converse between software, including analytical packages, is fundamental to the success of this approach. It is important to note that this process continues through design development and is a tool rather than a driver of the design, controlled through a collaborative and integrated process with the entire design team. 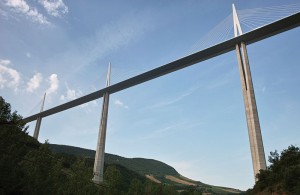 The early input of bridge constructability in the design process is also important, as it sometimes dictates the form of a bridge. Consider the use of stressed-ribbon over a deep ravine where falsework would be cost prohibitive, or a tied arch bridge moved into position in a single operation because of either environmental considerations to avoid temporary works in the crossing or logistical rationale such as a limited closure. Another link that is critical to the success of a project is the production and delivery of design information in a format that is directly implemented by the contractor/fabricator. This approach greatly benefits any project and is fundamental for design-build projects with aggressive schedules. While modeling tools, such as Tekla, are the mainstay for this effort, the success ultimately relies upon the knowledge and understanding of the fabrication and construction process. To this end, we have seen enormous benefit to having in-house fabrication expertise embedded within the design team. Qualified staff delivering design materials in the same software platform as the fabricator, and developing the design both in this format and following the methodology in which the bridge is erected, the project can benefit from improved schedule. This minimizes reproduction and RFIs and provides greater quality control due to a common understanding between the design and fabrication team and results ultimately in cost benefits by reducing uncertainty in the design material. 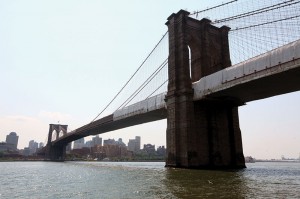 As the world population continues its migration to cities, and mega-cities emerge in Asia and Latin America, we will see continued challenges to cross new spans. The importance of aesthetics and the contribution of bridges to the urban fabric means that an integrated design team – combining architectural form with engineering elegance – is fundamental to the success of landmark bridge projects. This process demands highly skilled and collaborative engineers, architects and designers working seamlessly together in design, fabrication and construction. The future of bridge design requires reinventing this collaboration through the use of new platforms for developing and delivering the design materials. 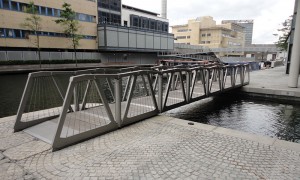